Global trade scenarios are fast changing, as major economies are moving towards larger integration via Mega trade agreements instead of small bilateral agreements with handful of other economies.

Two mega trade agreements Trans Pacific Partnership (TPP) and Transatlantic Trade & Investment Partnership (TTIP) promise to integrate West, East and South East Asia. TPP, being negotiated between Australia, Brunei, Canada, Chile, Japan, Malaysia, Mexico, New Zealand, Peru, Singapore, the United States and Vietnam- intends to “enhance trade and investment among the TPP partner countries, to promote innovation, economic growth and development, and to support the creation and retention of jobs”. TTIP, being negotiated between the European Union and the United states aims at multilateral economic growth. Both these agreements are believed to have the potential of setting member economies feet more into global value chain. TPP and TTIP formation together commands around 20- 22% of world population, but accounts for more than 35% and more than 50% of World GDP, respectively.

These trade engagements between major economies have the potential of adversely affecting non- TPP and TTIP member countries like India. It became a cause of concern for India, as India was not a participating member of TPP and TTIP, and had limited trade agreements unlike other major economies by then. India though had been negotiating India- EU BTIA, subduing the effect of its non- participation in TTIP - India had no or limited preferential trade engagement with the US and other participating countries in TPP. And therefore, it was imperative for India to participate in Regional Comprehensive Partnership Agreement (RCEP). However, vital difference between TPP and RCEP is participation of China in RCEP, but not in TPP. TPP could have given India similar edge as RCEP. 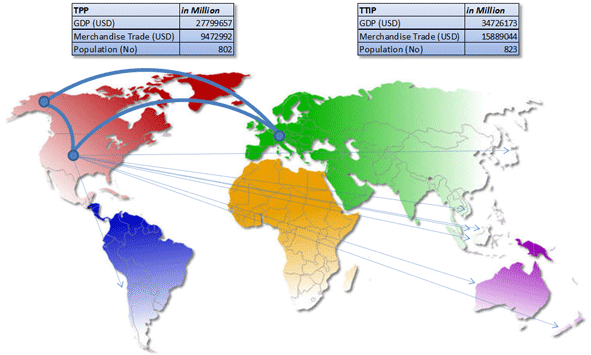 Integration into global value chain is important given fast changing global trade scenarios. Trade agreements are for the same purpose, precisely. Signing such mega trade agreements has certain temporary disadvantages, but permanent advantages in long run. Minimum temporary damage to domestic industry and maximum benefits in near/ far future to economy can only be ensured by timely inputs by stake holders/ interested parties during negotiations and critical analysis of the adverse effects by the Government. RCEP is into similar debate- how to minimize adverse effect and ensure maximum benefits?

It is evident that India’s participation in RCEP could not have been ruled out. So, whole heartedly accept India’s participation in RCEP, and prepare for smooth integration with diverse economies. This calls for not only engaging into negotiations from agreement perspective- but attempting to align domestic policies and foreign trade policies with this and other agreements under negotiation. Therefore, with global integration, it is equally important to align trade agreements with domestic and foreign policies to the extent possible.

RCEP negotiations between 10 ASEAN countries, India, China, Japan, South Korea, Australia and New Zealand which aims at integrating member countries into the global market through regional economic integration, leading to the largest regional trading bloc in the world commanding almost 45% of the world population with a combined GDP of around USD 21 trillion, is an ambitious partnership. India’s participation in RCEP- to certain extent would secure its position with respect to changing global environment. However, certainly, minor to major reforms in domestic and foreign policies will have to be made for outspreading reach into Global value chain with minimal adverse effect to domestic established strength and realized potential.

Current trade deficit with China is around 297 thousand crores; and India’s exports to China is merely 17% of its total trade with China. Further, since India already has trade agreements with ASEAN, Japan and South Korea- China is of major concern. Therefore, India’s final offer list to various RCEP members countries would vary based on potential adverse effect domestic industry might experience once the agreement becomes operational. In the 10th round of negotiations which was held in Busan, South Korea, between 12th to 16th October, countries exchanged actual tariff lines of commodities for tariff elimination.

India followed a three-tier approach for making tariff liberalization offers based on whether it has a free trade agreement (FTA) with the country or not. Among its free trade partners also, it has made separate offers to “ASEAN” and “Japan & South Korea”.

In Tier- 1, which includes members of the ASEAN countries (with which India already has an FTA) - India has offered 80% tariff liberalization. Out of it, 65% elimination of tariff will come into force immediately as the agreement comes into force and tariff elimination in rest 15% will happen over a period of 10 years.

In Tier- 3, India has offered 42.5% to China, Australia and New Zealand while each of these countries will offer India 42.5%, 80% and 65%, respectively. Even though it is tariff line liberalization pegged to the trade value for each country, New Zealand is asking that the 42.5% tariff liberalisation India will offer should include 55% of its trade value with India.

Will India gain or loss by signing RCEP- remains debatable. But with such fast changing global trade scenarios- levels have been raised; one who quickly adapts itself to changing scenarios might gain, while others may lose. Therefore, timely reforms in policies and procedures- domestic or foreign, along with signing trade agreements- need to be considered on continuous basis with change in global trade environment.