Government of India has recently come up with various domestic and international reforms w.r.t. policies, to support industry; boost domestic manufacturing; and encourage MSME sector, which constitute major proportion of total Indian Industry. In this regard, “Make in India” policy has enlightened vision of the industry, which itself defines its success. Agenda of Govt. also includes “Digitalization”, whose potential is visible to the industry, and soon every citizen shall realize its benefits.

In today’s scenario, it is important to be integrated globally, for which digitalization is necessary. Hon’ble PM Shri Narendra Modi has taken initiative to push technological development for the progress of the country. The step to launch ‘Digital India’ was welcomed by the corporate world, globally. On July 01, 2015 Government announced investment commitment of Rs 4,72,500 Cr from industry at the launch of Digital India week, which itself clarifies support for Digital India. Big corporate IT giants have also given positive response in support to the Government.

Digital India refers to ‘connects or empower’ people digitally. It is a program, projected at Rs 1,13,000 Cr, and will focus on using technology to save cost and time; thereby, doing away with inefficient systems by adopting latest means to connect with citizens, Govt. departments, industries; providing online interfaces/ services; and reduce human interference in business.

Digital India initiative was started with a view to bring big investments in technology, and thereby, also bridge gaps between various bodies of the country. It was to ensure that government services are available to citizens electronically, along with aim to utilize the same for ease of doing business in the country. The goal of this program is visualized in the form of nine pillars.

These pillars which shall give direct boost to electronic industry, shall also indirectly strengthen overall Indian manufacturing industry. The initiative shall be able to save not only time, but also money. It will a revolution for the country, wherein, Indian Industry would be able to uplift the economy and makes progress. It would have measureable effect on economic growth and job creation.

Success of “Digital India” not only lies in its implementation, but appropriate allocation and also its utilization/ adoption by masses post implementation. India stands quiet below other countries w.r.t. ‘benefit from new information and technology’ as per Global Information Technology Report. However, pillars of Digital India program launched by the Govt. shows that importance has been given to all factors- from investment allocation, implementation to utilization/ adoption of digitalization. And therefore, with this right approach- boost to economy is inevitable. 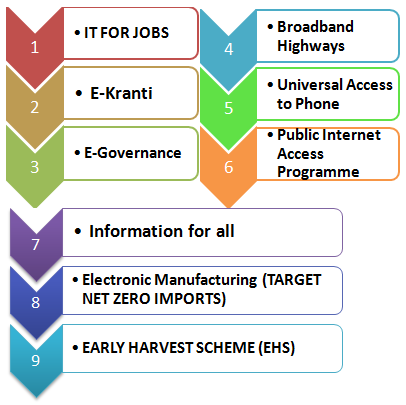