It was an important day on 27th May 2014 for Toshiba Machine, India, as the 6000th and 6001st machines were rolled out from its advanced manufacturing unit in Chennai. It is notable that the previous 1000 machines have been produced in about two years, showing the significance of Toshiba Machine in India. TMIC has been a jewel in the crown of Toshiba Machine since its acquisition in September 2012.

A function was organized to commemorate this occasion in which customers and employees actively participated. It was a moment of honour for Toshiba Machine to have the august presence of leading industrialist Mr. Avinash Gupta, Weener Empire Plastics Ltd., Mumbai and Mr. K. Anandhaganeshan, Hi-Tech Plastomers, Chennai for accepting the machines and gracing the event.

Mr. P. Kailas, MD in the presence of senior directors Hiroshi Azuma and Takashi Kamiyama, handed over the 6000th and 6001st machines to our valuable customers. Weener Enterprises, a company well known in packaging applications with many MNC clients and with about 56 machines purchased from TMIC, received the 6000th machine. The 6001st machine was received by Hi-Tech Plastics which is a new venture and they have started business in the high-growth RPVC line with the manufacturing of world class pipe fittings and valves. 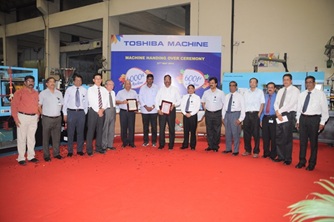 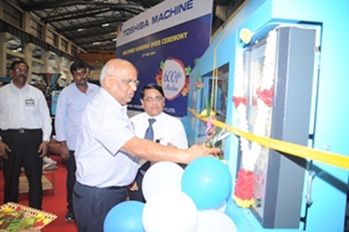 During the function, the senior management reiterated TMIC’s commitment to customers for continued support in services and improved product quality and to share the latest technology from Toshiba Machine, Japan to all domestic as well as overseas customers of TMIC.

This feat of crossing the landmark figure of 6000 machines would not have been possible without the continued effort by the employees of TMIC.

Maiden export to USA from TMIC...

One of the major targets set for TMIC after takeover by Toshiba Machine, Japan, was to develop servo hydraulic machines for the US market. The efforts towards achieving this were started a year ago, with the meeting of TMJ and TMIC engineering team to decide the general outline of the machines to be developed. This was followed by a series of interactions between TMJ and TMIC to exchange the ideas and concepts. This resulted in the blend of the superior Ram type clamping technology of Toshiba Machines, with that of TMIC’s servo hydraulics, thereby providing a solution which can be offered at market acceptable prices. By using the same controller V-51 used in other TMJ machines for US market, we could retain all the advanced features which make the processors’ life easy.

The TMJ engineering team through their various visits, video conferencing, assistance during machine assembly, testing and by sharing other technical information, helped TMIC to complete each stage of the development process with ease. Process stages to be followed for any new product development as prescribed by ISO standards were duly complied with under the guidance from TMJ team. This resulted in the successful completion of two models ISGS for these two models from TMJ team.

We would like to place on record our gratitude to TMJ top management, our Directors, TMJ engineering and sales team and our own TMIC colleagues who made this dream come true. 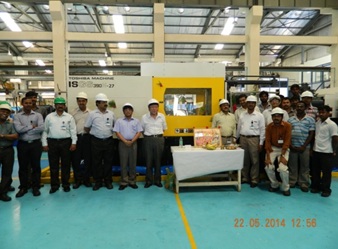